We are being called to live our faith in the way given to us by Jesus, the way of Death and Resurrection. Called in our own lives as we journey towards the judgement, we all face, but also in the reflection and renewal that must take place in our Churches and is being accelerated by the rapid economic and social changes we have seen over these last months.

The romantic ruins of monastic buildings litter the English countryside. Fountains Abbey, pictures here, is but one of many magnificent church buildings that stand as a monument to a different period of Christian history with very different institutional structures. These buildings were the headquarters of far-reaching organisations that were responsible for much of the economic activity of their day. Indeed, at their height, 25% of the population lived in or were entirely dependent on their existence. On the eve of their dissolution and rapid disappearance from the life of the Church in England, they reached the height of their beauty, power and economic prowess.

Many of us have walked around these ruins on trips and holidays and lamented the loss of art and architecture they represent. Some will have gone further and mourned the brothers and sisters that once wandered their cloisters and recited their offices for their patrons and the salvation of the wider world. Few would consider their demise as the end of Christian history and influence in England, and yet they represent a massive change from what had gone before.

A depressing statistic that I often recite in an attempt to motivate by fear, is that the Church of England has lost 50% of its regular attendees in the last decade. Our sphere of influence on the national stage, and in the hearts and hearths of communities the length of the country continues to erode at an equally rapid rate. Alongside this the giving that has supported to ordained ministry within the Church has declined as well. The deficit in our own diocese continues to grow annually and there appears to be little sign of the trend reversing.

In this diocese we have been asked to partly address this problem by reduce our cost burden – which is largely the stipends (wages) of its clergy and staff. The coming couple of years will see a reduction in clergy numbers by 25%. Alongside this parishes are going to be asked to contribute more towards to common purse in order to help keep our heads above water.

Much has been written and said about the motives and method – but for us in the parish it is simply fact that must be processed and worked through. We are not without hope in this task because the way has been set out by Jesus Christ. Huge shifts in our intuitional structures, staffing and teaching have happened before, and often they have made way for something else. Monasteries gave way to parishes which rose in significance and importance as the habited brothers and sisters disappeared from the lives of ordinary people. Perhaps it is time for the model that has served us since to give way to something else, something new?

This process will be painful, and we will lament just as we do when we gaze upon those magnificent ruins. However, we are a resurrection people. Without death there can be no resurrection. We have to begin to let go of some of the past if we want to make room for the new. What comes will be recognisable and bring us Joy and glory to God; the Risen Christ, wounded, was still the Jesus the disciples knew. Whilst things might never be the same, never be as they once were, it is entirely possible they might be better.

These words resonated with me. We are often called to choose between material comfort and security whether in our personal lives or our faith journey. I feel this pandemic has been a renewal of true trust in only god and his true love to bring us through. Whether materially. Mentally or physically. Everything has been laid bare. The so called structures of sameness have disappeared. Economical surety and simply trust that god will find a way in all this madness is what we are being called to believe. We are definitely not in control but we simply have to go back to grass roots and know that god will provide and find us a way. My lifestyle journey has taught me he (God) always brings us through where sometimes there seems no way. Money is important but faith is often tested so we have to simply trust only in him. Whether for buildings or for our future. This is such a unique time. If we can trust and still walk forward we will see the strength of gods love in this lonely time xx these are just my thoughts take care

In my lifetime the Church has gone through many changes – and we have survived and grown – so, roll on the next changes.

Interesting and thought provoking. Be positive and open to change. As a parish we need surely to keep going with introducing the young families into our church community, but also think of ways to draw in other ages too. Any are welcome and must not be frightened off. We may have our regular seats in church but dont own that space. Remain hopeful trusting in the Lord. 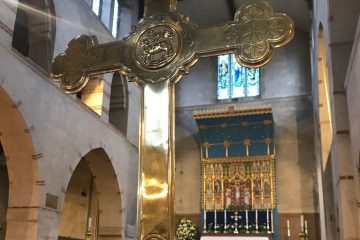 Essential adjective adjective: essential absolutely necessary; extremely important. During the current pandemic this word has appeared much more frequently in our papers, notices and news stories than would be usual. In our modern free thinking, moving Read more…