Black lives matter… to us, here, at St James’s

Suddenly there is another news story dominating social media, the front-pages of our papers and the conversations of those who are interested in current affairs. It is the story of George Floyd, an African American who died of asphyxiation (suffocation) after a police officer knelt on his neck for an extended period during to restrain him during an arrest. His words were a desperate plea, and yet are deeply laden meaning that George didn’t intend; they are here for us all to consider:

It should go without saying, and yet here we are, that racism is deeply sinful. There is no place in the body of Christ for the discrimination and prejudice. You are not blessed, lucky or superior in morality or intellect because you are lighter skinned. For 2,000 years we have been preaching, teaching and listening to St Paul’s letter to the Galatians, for over 5,000 years the children of Abraham have told how we are ALL made in the image and likeness of God, Gen 1:26.

For many of us the sort of discrimination and racism that can build and lead towards the violence and indifference shown towards George, and many other Black and Minority Ethnic individuals experience is far off and distant in our thinking and experience. We have, what is termed, white privilege. This has nothing to do with your own economic background, how poor or otherwise you might have been in childhood, earlier life, or even now. It is the simple acknowledgement that in life, in this world, there are some opportunities that are open to us, some experiences that we will not have to endure, many dangers we don’t face, simply because we were born white. It’s not about fault, instead we just need to acknowledge it if we are to begin to understand how deep this canker goes in society and global culture.

This happened in America... why should we care?

From a Christian teaching perspective, we should first acknowledge the deep solidarity we feel with he rest of humanity, or should feel according to scripture. We are one body. We are neighbours. We are family. These statements are given to us in scripture so that we might feel and fight for one another.

From a socio-political perspective, America presents itself, and not without justification, as the example of freedom and democracy to the world. It is not perfect, but who is outside heaven, but for many that claim rings true and they look towards it as an ideal. Ideals are not realities (do you remember those competing voices in the song ‘America’ from West Side Story?)

Our language, our culture, education, economy, tastes, entertainment are all intricately linked with our larger neighbour. In 1956 the residents of Birmingham, Alabama staged a bus boycott because of the discrimination they faced in transport – a protest which is now famous. 7 years later the Bristol bus company (England) were still refusing to employ black and minority ethnic drivers and conductors on its buses. And so a similar boycott we used to change policy.

Lastly, and most importantly, George was a human being. He was someone’s son, he was loved. But to the officers involved in his arrest, in their treatment of him, this was less important than the colour of his skin.

But what about the good police officers

Officers ‘take a knee’ to show solidarity with the protesters they are policing.

Posting pictures of white officers ‘taking a knee’ or showing solidarity with protesters is all very heart-warming and is part of the wider story. But it doesn’t come close to addressing the balance of inequality represented by this story.

In the UK BAME (Black and Minority Ethnic) communities are 28-times more likely to be stopped and searched by the police. They make up 25% of the prison population. Even during this pandemic, which is apparently indiscriminate, BAME people are more likely to be exposed to it and die from it because of the kind of work and living conditions they endure. BAME individuals only make up 13.8% of the UK population.

In the Church there are hardly any BAME bishops, few senior clergy, and a disproportionately small number of clergy. All this despite being over-represented in the worshiping communities of the Church of England. This sin of silent and unacknowledged discrimination is everywhere, even within our beloved church.

I can already hear you begin to justify some of these figures… just don’t. At the root of it is racism and discrimination, acknowledged or unrecorded. Crime is a consequence fo economic and educational deficits, representation within the Church is as a consequence of expectation and inbuilt bias. Even life expectancy and community health has its roots in investment in primary healthcare, living conditions and economic opportunities.

What do we do?

Let’s be careful not to think that it is our job, as a majority white, privileged and middle-class community to ‘fix’ the problems facing BAME communities and individuals here and around the world. It isn’t and we did that during the colonial period when we gave them our ‘civilisation’.

We can notice. Begin by acknowledging the problem though. Seeing the role our own unconscious bias plays (not wilful racism, but just how we have been hardwired to see the world by our culture and upbringing). In being ‘conscious’ we can wake up and take notice of the part we play. Call our racism and injustice among you’re friends and family when you see it.

We can pray. The profound equality and solidarity that can be found in the God, our universal kinship, is a reality for us who have faith in God. It is also a moral aspiration for a broken and sinful world. Let us pray that that Kingdom of Heaven might be built here on Earth. Put George and others like him in our prayers tonight.

We can feel. Compassion is at the heart of God’s response to our pain and suffering. It should be at the heart of our response. Be moved by the stories you hear and the pictures you see. Get angry, be upset, feel the injustice. As we should know, passion can truly transform reality. Start with a simple exercise in empathy, when I saw George I saw my sons faces under that officers knee.

We can speak. Across the world communities are raising their voices in protest at what has happened in America, and is happening in our own nations and communities as well. Adding our voices to the victims of this discrimination and violence so that they might be heard. We know something about this because when 2 or 3 are gathered God will surely hear and answer their prayers. Let us help make up the numbers by talking about this terrible event, and the even more deplorable response from some in authority, amongst our friends and families and neighbours.

Fr, isn't this all very political

Yes. All that means is that is has real bearing on the way we live and how we are organised and governed. As Christians we are called to speak to issues concerning our government, authority and the rules that dictate how we live.

It is often said that you should not talk about politics or religion in polite society. Well, take a look at those pictures of brutality, poverty, violence and discrimination that stream into our homes from across the world on a daily basis and tell me – has the time for being polite passed?

When someone can’t breathe, you do all you can to help them get air into their lungs. It can be as simple as taking your knee from their throat.

Clergy and religious being political during the Selma civil rights marches – acting as stewards and shields towards police brutality.

In 1942 I was 9, put into a geriatric ward because that was the only available bed in London, to have emergency surgery. First night 2 ladies died. After my op. I was embarrassed, and scared, when offered a bedpan – no curtains or screening. A buxom black nurse scooped me up in her arms and took me to the toilet. No fuss, just love. I had never seen a coloured person before, but to this day I have never forgotten the kindness of a very black stranger. Have had no colour prejudice ever because of her.

In 1942 I was 9, put into a geriatric ward because that was the only available bed in London, to have emergency surgery. First night 2 ladies died. After my op. I was embarrassed, and scared, when offered a bedpan – no curtains or screening. A buxom black nurse scooped me up in her arms and took me to the toilet. No fuss, just love. I had never seen a coloured person before, but to this day I have never forgotten the kindness of a very black stranger. Have had no colour prejudice ever because of her. 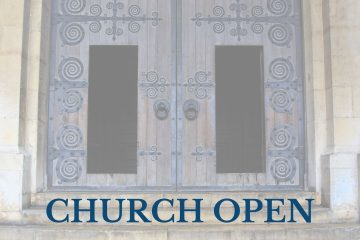 A peace which passes all understanding It is received wisdom that when you take on a Church as a new vicar you should change as little as possible. When you do change anything it should Read more…

We all have our heroes: personal, historical, real and fiction. These are the people we set up as idols, to be respected, adored and imitated in the difficult decisions and hard times of our own Read more…

There is no doubt that our work in God is to live according to, and in order to spread, the good news that is Jesus Christ. And it really is good news; although sinners, God Read more…